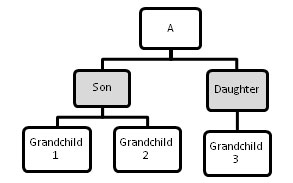 However, it is important to keep in mind that these grandchildren are
not inheriting
through their parents, but are fictionally positioned
in the place of their parents. This distinction can have dramatic effects that are not self-evident. For instance, the effect of a renunciation by a grandchild of the succession of his parent does not preclude representation. Thus, in the above example, if Grandchild 3 had renounced the Succession of Daughter, he nevertheless may participate in A’s succession by representation.
La. Civ. Code Article 886 (“one who has renounced his right to succeed to another may still enjoy the right of representation with respect to that other”).

By the same token, even if Daughter had disinherited Grandchild 3, Grandchild 3 nevertheless may participate in A’s succession because disinherison by a parent only deprives a forced heir of his legitime and does not affect the grandchild’s ability to represent his parent. Thus, Grandchild 3 may be prevented from representing Daughter only if A exercises his independent right to disinherit grandchildren.
La. Civ. Code Article 1622.

Thus, we see that Louisiana’s law of intestacy favors descendants notwithstanding the actions of intermediary persons who otherwise might have been heirs. But there are limits to who can participate by representation.

Second, one may not become a representative through the benevolence of others. This is illustrated in a chain of title that I encountered recently which is adapted to our example of Grandchild 2 who was not filiated with Son. Upon Son’s death, Grandchild 1 wanted his half-brother to be treated equally in the succession of A, and so he conveyed one-half of all of his interest in
Son’s estate to Grandchild 2. That suffices to allow Grandchild 2 to acquire 1/2 of Son’s estate, but because representation does not depend upon succession, but rather, upon the status as a descendant, Grandchild 1’s conveyance does not bestow upon Grandchild 2 the right to represent Son (along with Grandchild 1) in A’s succession. In order for Grandchild 1 to allow Grandchild 2 to share in the Succession of A, it is necessary that he also convey one-half of his interest in
A’s succession. Note that if this beneficence were attempted by Grandchild 1 prior to A’s death, it would be ineffective because the succession of a living person may not be the object of a contract.
La. Civ. Code Art. 1976.